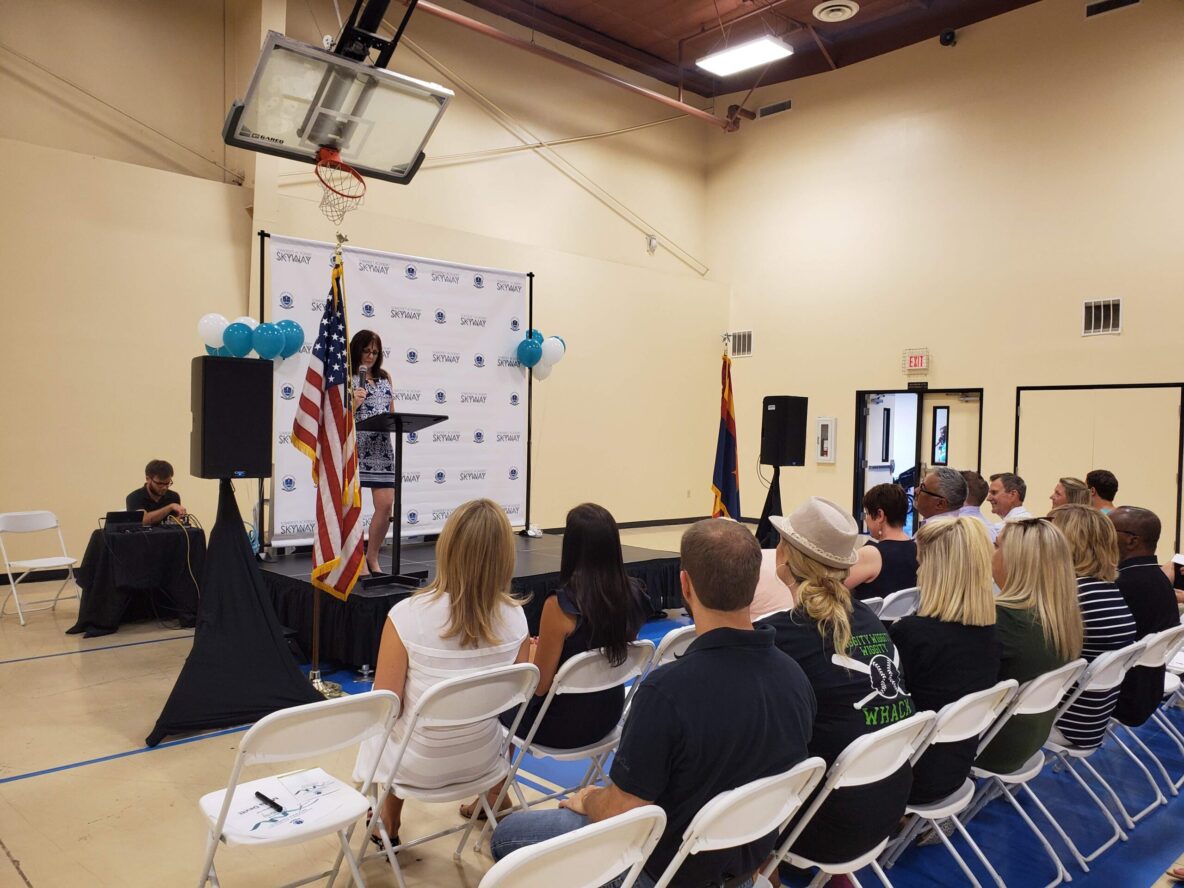 Trying to struggle through an event with no knowledge of how to operate a PA system can be frustrating. The purpose of this post is to take the intimidation out of the equation, and give you the confidence you need to make your event run smoothly.

Most PA systems that we set up consist of two speakers, a mixer, a microphone, and an aux cable. There are slight variations though (only one speaker, no mixer, no aux cable, etc.). We’ll go over some varied setups now.

With the most basic setups, the microphone has the ability to plug directly into the back of the speaker, eliminating the need for a mixer and allowing you to control volume and EQ (we’ll get to this later) from the speaker itself. While this is, in most cases, more budget-friendly, it gives you much less control over the overall sound not mention less inputs. Simply power the speaker, plug the mic into the speaker via XLR cable, turn up the volume, and you’re good to go! Also, be sure to contact us if you’re not sure if a basic PA is a good fit for your event, we’re here to help.

PA Setups With a Mixer

Our mixer sizes vary from just 3 to 7 inputs in our compact sizes all the way up to 32 inputs for our full sized modules. Depending on the size and scope of your event, we’ll find the mixer that suits your needs perfectly.

EQ and How to Approach It

EQ can be a daunting concept for some, so lets take some of the stress out of the situation with some pointers.

For starters, what is it? EQ is short for equalizer and refers to equalizing certain parts of the audio spectrum in order to get a balanced sound or to cut out unwanted frequencies. EQ can be as simple as turning a couple nobs that control bass, mid, and treble frequencies as a group (standard EQ), or as complicated as controlling multiple sliders that affect individual frequencies (graphic EQ). On some digital mixing consoles you even have the ability to choose the exact frequency you want to boost (turn up) or cut (turn down), as well as the wideness of the frequency band, giving you utmost control. This is called a parametric EQ.

I think it’s important to learn about all kinds of EQ and what it can do, however, in this case we’ll be going over standard EQ only, just for the sake of simplicity.

Most compact mixers have either two or three nobs for eq: bass and treble, or bass, mid, and treble. In addition to those, some mixers even have two mid nobs or an extra nob to control the mid frequency. For most simple setups though, bass and treble nobs are all you need to get a polished sound.

The Basics of Gain

Now, let’s talk about “gain” for a bit. Gain is basically a secondary volume control, but its importance can’t be overstated. Essentially a mixer has two volume controls, however, gain comes before EQ in the signal chain, whereas channel volume comes after. So gain allows you to set a signal’s volume before you EQ it, giving you the ability to clean up your sound significantly. For example, if you play audio from a laptop that has the volume all the way up, it may come through sounding distorted or just plain loud. Turning down the gain will decrease the possibility of distortion as well as give you more control over the volume itself. On the other hand, If the signal comes in sounding too soft, you can turn up the gain to get a little more juice out of it.

For spoken voice, I find it best to cut out bass frequencies completely. No one likes a boomy, bass heavy sound during a speaking engagement, especially in a room where low frequencies can gather and reverberate. A boomy-sounding presentation can come off unprofessional, so turn down the bass to get maximum vocal clarity.

Keep in mind; although cutting bass out of the voice is a good tactic, most other EQ adjustments will be minor in comparison. Just a matter of twisting the nob slightly. Boosting too much of a certain frequency can result in feedback.

Speaking of feedback, let’s go over it briefly. Feedback occurs when the sound coming from the speakers gets picked up by the microphone, resulting in an endless sonic loop that sounds like an ear-piercing screech or the enunciation of a particular frequency, sometimes referred to as a hum or a ring depending on the frequency. If it sounds like a low hum, cutting the bass should take care of it, but be sure to start with slight adjustments. Cutting any frequency completely could cause other frequencies to rear their heads, causing an even bigger headache. As for a mid to high frequency ring, this may take a little more trial and error. Slightly cut the mid and/or treble until you hear a noticeable difference and the ring subsides. If your mixer has the ability to specify a frequency on the mid nob you may want to experiment with that as well. Cut the mids and sweep the frequency nob to hone in on the source of the feedback. You could also try turning down the gain nob for that channel at the top of the mixer, it may be that the signal is just too loud.

You can make a presentation or speech even more pronounced by boosting the mid frequencies. Around 1k, or 1,000 hertz, is where the human voice’s clarity lies, and by boosting the mids the audience will be able to hear you even more clearly. But remember, boosting a frequency too much can cause feedback.

For music, like a song from Spotify or Pandora played through an aux cable, it’s usually best to leave the EQ “flat” or unchanged. Unless the room is a little bassy (too much bass) or tinny (too much treble), in which case you can cut the bass or treble respectively.

When mixing musical instruments it can get a lot more complicated and we definitely recommend hiring a professional audio engineer, but as a general rule of thumb it’s best to start by EQing the unwanted frequencies out first, rather than boosting. From there you can adjust volume levels to get a nice balance, then boost frequencies accordingly.

We Hope This Helped

We sincerely hope you’ve found this information helpful. If you have any further questions or concerns, please feel free to give us a call or reach out to us anytime so that we can make sure the sound at your event ends up being as crisp and as clear as possible. We look forward to hearing from you!